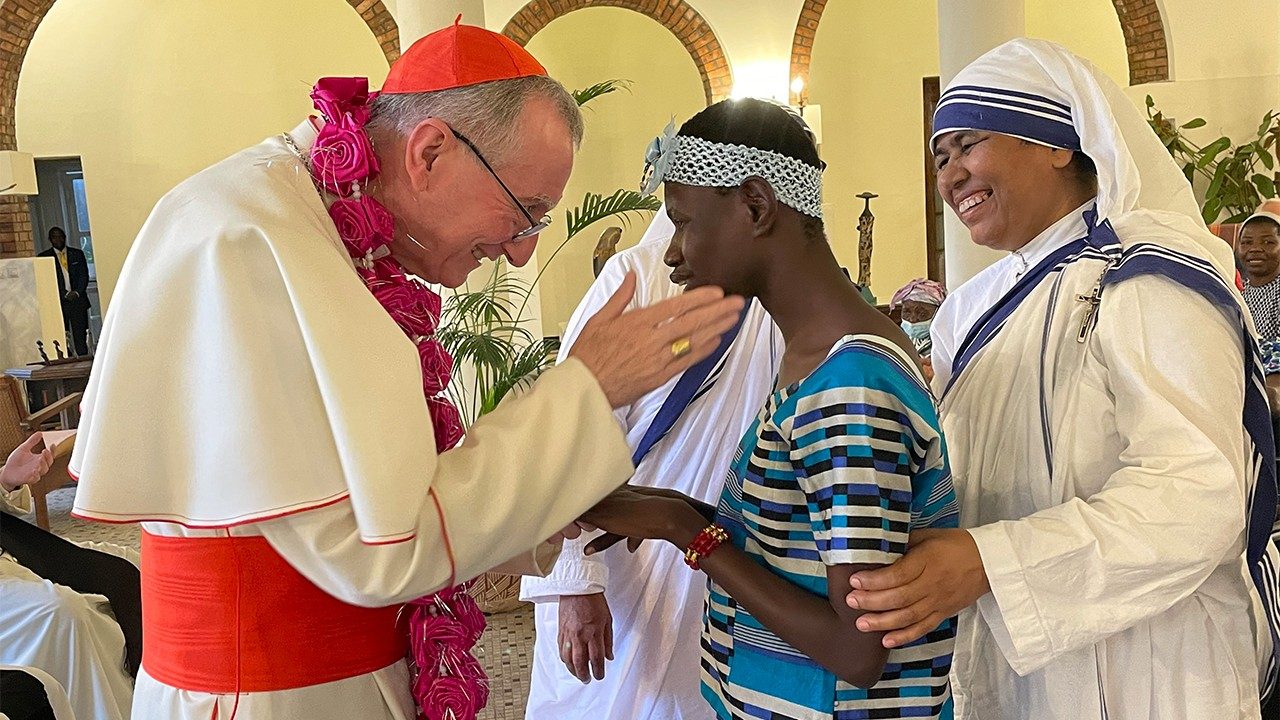 On his second day in the Democratic Republic of Congo, Cardinal Pietro Parolin shares Pope Francis’ closeness with local religious congregations and the poor whom they assist, saying they are proof that love “never runs out but only multiplies.”

Many years ago, on a Holy Saturday morning, the Sisters of the Sacred Heart of Jesus found a man named Guy laying outside their front door. His body was covered with flies and sores; his parents had abandoned him on the street, accusing him of witchcraft after his two brothers died in the space of only a few days. Guy had been beaten to a pulp, and had had boiling water dumped on him. Now, Guy teaches French to young people, and asks for prayers for his family’s conversion.

Stories of rejection and suffering

On Sunday afternoon, Guy was seen smiling as he met with Cardinal Secretary of State Pietro Parolin at the Apostolic Nunciature in Kinshasa, along with a group of local religious congregations and those they assist.

Following the morning Mass in the DRC capital, Cardinal Parolin dedicated his last meeting in the country to the poor and ill, and to bringing the Pope’s care and concern for elderly people, children, single mothers, couples, and teenagers who experience suffering.

Each of them endures some form of rejection and social stigma, illness, disability, or abandonment, even by their own families, like Guy.

The Cardinal sought to offer the Church’s support for them and for the religious men and women who offer them food, medical care, and love.

‘From sadness to joy’

Cardinal Parolin told those present that these people are all human beings who “have passed from death to life, from humiliation to dignity, from sadness to joy.”

He offered smiles, handshakes, and blessings to men and women in wheelchairs, and patted the cheeks of young people.

In return, he received gratitude, song, and a necklace of purple roses—a typical Indian gift—placed around his neck by the Missionaries of Charity.

Stories of service for the poor

As part of the encounter, representatives of various religious congregations took to the microphone to tell their stories of service.

Sister Marie Chimene, with the Daughters of St. Joseph of Genoni, spoke first, telling of how her hospitaller order helps local street children, whom they prefer to call “children of God”.

The nuns go out to find these children on the streets of Kinshasa and bring them back to offer them a home.

“These young people no longer have a home or a family, because they have been kicked out or for other reasons that we do not always know, since there is great suffering that prevents them from speaking. Some have even been kidnapped and then abandoned,” explained Sr. Marie. “We try to offer them regular hot meals, training in hygiene and manners, and we teach them to pray.”

She told the story of Mordecai, who began living on the streets at the age of 11 but who now, at the age of 14, dreams of becoming a pilot, and the stories of Marthe and Nathalie, two blood sisters whose mother preferred to abandon them on the sidewalks.

Another order helping people on the street is the Hospitaller Sisters of the Sacred Heart of Jesus, who take in the so-called “sorceleurs“. These “sorcerers” are accused of being involved in witchcraft, even for so minor an offense as being unable to walk properly, and are often abandoned by their families.

The Sisters founded the Telema Center, of which Guy mentioned above is a guest. Josephine is another, who ended up living on the streets after a nervous breakdown and went without bathing for years, wearing torn clothes and eating from trash bins.

“One day, one of our sisters met her, took her to our community called Bethany, took care of her, and then brought her to Telema. A month later, she had her smile and dignity back. Three months later she was reintegrated into her family; now she has a small business.”

The “grandparents” of the Sisters of the Poor

Sister Claudia Nicoli, an Italian-born nun, talked about the Sisters of the Poor who have served in DRC since 1952.

She recounted how six of her religious sisters died of Ebola in Kikwit in 1995.

“When the epidemic started, two of them who were in Kinshasa went to Kikwit (500 km away), knowing full well that they might die. The staff told them, ‘If you go, you might die.’ They replied, ‘What has the Lord done for us?'”

The Sisters of the Poor have also run a home for 46 years to take in those whom others reject, particularly malnourished children, orphans, the homeless, and the elderly.

“Poverty dehumanizes society,” said Sr. Claudia. “Young people, the sick, and the elderly who have nothing to offer their families are cast aside and abandoned. In our house, they are welcomed as relatives.”

Missionaries of Charity at the Nunciature

Witness of the Missionaries of Charity

The Missionaries of Charity were sent to the Democratic Republic of the Congo in 1987 by Mother Teresa, who was deeply touched by the misery she encountered in the country, opening three homes for those suffering “all kinds of poverty.”

The Missionaries introduced Cardinal Parolin to a young man found when he was 18 years old walking naked through the streets, his body covered with wounds. “He was violent, breaking benches, and scaring everyone. Gradually he calmed down and started talking.”

Taken in by a religious brother, he is now “completely changed,” living at home, playing music at Sunday Mass, working in a real estate agency, and soon to be married.

The Cardinal greeted and blessed him, Martine, whom the Missionaries found in a cardboard box, and Kizito, a hyperkinetic boy now 14 but taken in at the age of 9. “He used to talk nonstop for hours and was difficult to control. Now he is able to perform some domestic activities.”

A song of thanksgiving for Cardinal Parolin

Finally, representatives of the Community of Sant’Egidio told the Vatican Secretary of State about their Dream project for HIV patients. Thanks to a care center established in 2011, more than 1,700 people suffering from AIDS, malnutrition, hypertension, diabetes, malaria, and tuberculosis are being treated free of charge.

During the height of the Covid-19 pandemic, the Center remained open and its laboratory used to diagnose the virus or collect samples. Volunteers are currently engaged with health staff in a large awareness and vaccination campaign in markets, ports, and health centers.

Taking the floor and speaking with visible emotion, Cardinal Parolin told all these people that he would carry their stories to the Pope.

“I will certainly bring your names and faces to Pope Francis, asking him to carry you in his prayers, giving thanks to God for the wonders He has done for you.”

“The universal Church thanks you and encourages you to persevere in your efforts, even at the cost of difficulties and apparent failures,” the Cardinal said. “In your daily lives, you experience how love, when distributed, is not divided and does not run out, but multiplies and grows.”

“Your names sound like so many beautiful musical notes in the song of thanksgiving that we must present to God every day,” the Cardinal added. “Just when you thought all might be lost, light and life arose in your pain and transformed everything. Of course, not everything is rosy and you still face difficult moments, perhaps many anxieties and fears of tomorrow. But God has opened a new way for each of you; He has put you back on your feet, and invites you to continue walking with Him. He has extended His hand to you, do not let go of it.”