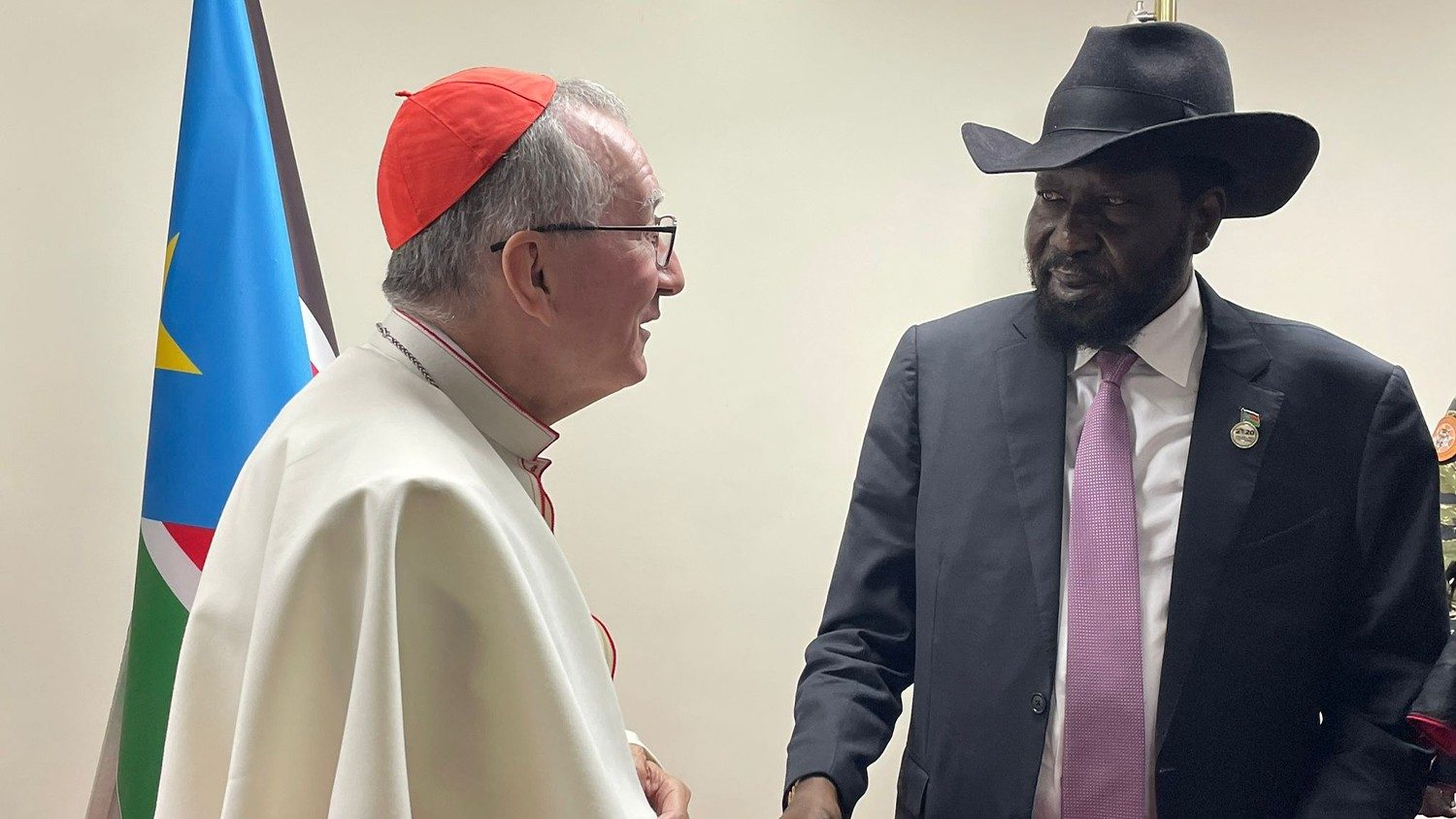 The Cardinal Secretary of State landed in Juba on Tuesday morning on the second leg of a visit taking him to Democratic Republic of Congo and South Sudan.

Passengers on the Ethiopian Airlines flight began looking around during landing to see who was being welcomed at Juba airport. The plane had not yet touched the ground and they could already hear the rhythm of ngoma drums and ankle rattles and the traditional “zaghroutah” ululation of South Sudanese women. Cardinal Pietro Parolin peered through the window: “What a beautiful welcome,” he exclaimed, as splashes of vivid colour gradually became more and more defined: the red of the long velvet carpet, the ivory of military uniform, the yellow, green, and orange of the tribal garments of women and children dancing and playing traditional instruments, groups of nuns with white kerchiefs on their heads waving placards that read “Welcome to South Sudan.”

Vatican Secretary of State Cardinal Pietro Parolin has left Kinshasa to travel to Juba, the second stop on his trip to Africa on behalf of the Pope. He will meet Tuesday with the …

The atmosphere was festive to say the least. Under a scorching morning sun Cardinal Pietro Parolin stepped from the plane onto the tarmac and was immediately greeted with flowers and a beautiful traditional bead necklace. Awaiting him at the start of the second leg of his visit to two African nations, were the apostolic nuncio , Germany’s Hubertus Mathews Maria van Megen, Cardinal Gabriel Zubeir Wako, archbishop emeritus of Khartoum, and several bishops in white cassocks, including Christian Carlassare, the Vicenza-born missionary Bishop of Rumbek.

A welcome from the Church and from the people

The music and shouting made it impossible to exchange greetings and words. The Cardinal managed however to briefly greet the government’s senior advisor, General Kuol Manyang Juuk, who was at the airport on behalf of President Salva Kiir. His meeting with the President was scheduled for the afternoon, as was an encounter with the first Vice President, Riek Machar, and then the Bishops’ Conference. He would go on to tell them how “impressed he was by such an incredible welcome” and express his “gratitude to each of you, to the President of the Republic, to the representatives of the Church, to all the people of South Sudan.”

“It is a great joy for me to be here and to be here for a few days to celebrate, to pray, to meet people,” and to do so “on behalf of the Holy Father, Pope Francis, who always carries you in his heart,” Parolin said, “is concerned about peace and reconciliation in South Sudan and follows the good developments in relations.” “Thank you very, very much,” he concluded.

The cardinal then travelled to the Apostolic Nunciature, a rented building for now. In fact, the Cardinal will bless the foundation stone of the new ‘Pope’s new house’ in South Sudan in the coming days. He was driven by jeep, the only type of car capable of traveling these bumpy roads made of red soil that sticks to your clothes and never goes away. Not a long journey, a journey nevertheless, sufficient to impress upon him the image of extreme poverty in which the African city finds itself. A “great suburbia” of red earth roads and buildings arranged in a haphazard manner, with shacks made of wood, thatch and tin sheets lining the sides of the streets. As the cars with the white-yellow Vatican flag pass by, people turn to look, and children wave. They walk alone amidst cats and goats, or stand next to their mothers in the clothes and fruit stalls built on mud, in the shade of walls painted with mosquito repellent. Cardinal Parolin brings the caress and the closeness to this population that suffers not only from dire living conditions, but also from the instability generated by years of wars and violence.