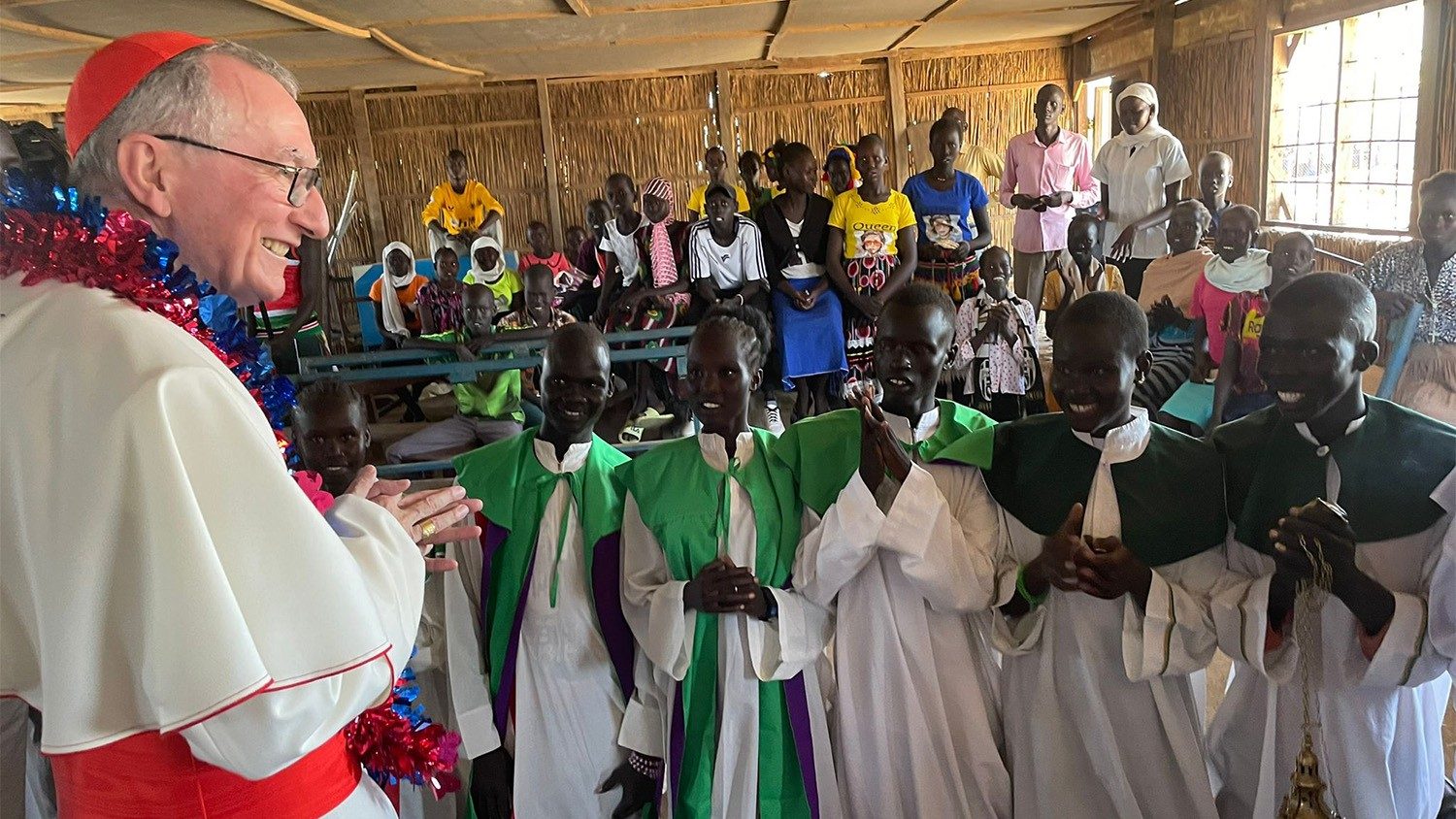 Cardinal Pietro Parolin celebrates Mass in the Bentiu IDP camp in northern South Sudan, where about 140,000 people, more than half of them children, are given shelter, and meets with local authorities and representatives of the UN Mission to the African nation.

Three children play inside the hulk of a crashed Boeing plane on a vast expanse of red earth. Others are barefoot, bathing in the Nile or rinsing their legs in one of the many puddles of water. Some wear dresses or oversized football jerseys. Elsewhere, cows and goats graze on mounds of earth created to stem the floods.

These children are the protagonists of Cardinal Pietro Parolin’s visit on his second day in South Sudan, as he travels to Bentiu, an area in the north of the country where a camp for displaced persons of the same name is located. Last year, the camp became well known because of cases of hepatitis and cholera, as well as its poor sanitation conditions.

It is within this expanse of white tents and tin shacks and curtains held up by sticks that the Vatican Secretary of State celebrated Holy Mass on Wednesday, during which he noted that God hears the cry of those who suffer injustice, abuse and persecution.

Arrival on a UN plane

After departing at dawn on Wednesday morning in a fifteen-seater UN plane and flying over rivers and forests for just under two hours, Cardinal Parolin arrived in this desert area, where only a slight wind gives some respite from the nearly 41°C heat that lifts scarlet dust that sticks to clothing and cellphones.

Groups of women gathered to welcome the Cardinal, honoring him with a white robe and wreaths of flowers. Behind them were many children.

A group of teenagers with big hats and big skirts stood before the Cardinal: “Welcome, Your Eminence,” says the oldest, and after a bow, she starts moving in a tribal dance, followed by her companions. Together they climb into the open trunk of a jeep. They escort the Cardinal’s car to the center of Bentiu, where the meeting with members of the local governorate takes place. It was an informal meeting to exchange greetings and reiterate the desire for peace and development.

Children on a mound of earth

Entrance into the city

All along the road were large puddles, donkeys laying on the ground and military vehicles with soldiers carrying Kalashnikovs – the most common weapon in these parts.

After about 20 minutes, the Cardinal makes his entrance through the city gates. Hundreds of people pour into the streets, emerging from their tukuls, the typical thatched and woven wooden dwellings covered with dried mud.

Children and babies join the two rows that create a corridor for the Cardinal; men play leather drums, women spread blankets on the ground, over the mud. Many probably do not understand the meaning of the event taking place, but everyone, however, joined in the celebration. There is a lot of applause, choruses of alleluia sung on their knees and with eyes closed, under the sun beating down on their foreheads.

Cardinal Parolin tries to shake hands with those in the front rows, but at the mere outstretching of his arm, there is a risk of people getting crushed. For the children, small gestures such as high-fiving seem to be a source of immense joy. They run after those who pass by and shout “Brother, brother!” while giving a thumbs-up or waving a fist. They are eager to have their pictures taken. So are the women who created a first line cordon behind the Secretary of State, smiling as droplets of sweat glide over their scarifications, the tribal scars arranged in rows of dots. To the local culture, these are symbols of beauty.

Blessing in the parish

In the midst of this crowd, Cardinal Parolin enters the parish of St. Martin de Porres. It is not a church but a huge, semi-dark hut lit by two rows of little altar servers holding green candles. Those gathered sing for the Cardinal as three elderly women elude security and bring him canvas slippers as a sign of hospitality.

Cardinal Parolin then addresses the people saying, “I have not come on my own but to bring you the affection of Pope Francis. I come to prepare for his arrival as John the Baptist. The Pope wants to come to South Sudan; he is planning a trip to Juba but the visit is intended throughout the country, to meet all the people.”

His words were translated into the local Nuer language by a priest. The Cardinal then asked for prayers for the Pope, and added, “I am happy to be here, to share your faith, your joy. You are really good Christians, good Catholics.”

In the Church of St. Martin de Porres

The next stop was in a container – the headquarters of UNMISS, the United Nations mission in South Sudan, where the Cardinal met with the head of the mission for South Sudan, Paul Ebweko, and assured that “the Holy See appreciates what is being done for the people in the camp.”

The Cardinal then returned to the northern area to enter the camp and celebrate Mass. It is difficult to find adequate words to describe the welcome given to the Secretary of State, who was immediately ushered into a jeep in which he stood, covered by a yellow umbrella to shield himself from the sun, and began to greet the people. This does not stop for all of the approximately ten kilometers leading to the barbed wire gate that marks the entrance to the camp.

He greeted the more than 140,000 residents of the center, who chant, wave flags, show photos of St. Josephine Bakhita, and run after the vehicle. Some try to approach but are repelled by volunteers with wooden canes. Many are barefoot, with dusty legs and hands. In some sections, the smell is nauseating from animal droppings and stagnant water, yet their joy upon receiving the Cardinal is visible.

Cardinal Parolin with representatives of the UNHCR

Mass in the camp for displaced persons

The Cardinal celebrated Mass in the forecourt of the camp under a decorated awning. Teenagers with big hats, along with little girls dressed in white, line up as if in a procession as they perform a dance to music from a piano.

Cardinal Parolin, in his homily delivered in English, said, “We find ourselves in this difficult land and yet always loved by God.”

He then spoke of hope, which “is not a disembodied hope, separated from suffering and ignorant of human tragedy” or one that “does not consider the very difficult reality of the people of Bentiu.”

On the contrary. “Our history makes us cry out to the Lord, makes us lay before his altar the injustices, the abuses, the persecutions that too many of us still suffer; but we know that this cry is heard by God and redeemed, a cry that he himself will transform into a song of joy, if we know how to ask forgiveness for our persecutors and pray for those who hurt us.”

A song of joy erupts at the end of the Mass, and the Cardinal walks a short distance as he tried to shake as many hands as possible in order to transmit Pope Francis’ affection to the people, which is the underlying goal of the whole trip to Africa.