The BMW CE 04 premium electric scooter has been showcased in India after the success of the BMW C 400 GT maxi-style ICE scooter. BMW Motorrad, the Bavarian automotive giant’s motorcycling division is trying to replicate the success of its ICE-powered ultra-high maxi scooter’s success with the introduction of a comparable big and ultra-premium electric scooter in India.

The BMW CE 04 is an amalgamation of cutting-edge futuristic design and a sustainable electric powertrain. BMW Motorrad has infused sci-fi-inspired styling cues with floating panels, minimalist graphics, an exposed rear wheel, contrasting orange highlights, etc. The high-end e-scooter is powered by a 20hp liquid-cooled PMSM paired with an 8.9kWh battery pack. The range is claimed to be around 130km on a single charge. The vehicle goes from 0 to 50kmph in 2.6 seconds and has an electronically limited top speed of 120kmph.

The BMW CE 04 charges up from dead to 100 percent in 4 hours and 20 minutes using a 2.3kW charger. The CE 04 can also charge via a 6.9kW fast charger which allows it to charge in 1 hour and 40 minutes. The vehicle also gets dual 265mm discs up front, a single disc at the rear and ABS. Safety also includes traction control. The seating height is 780mm, and the scooter weighs 231kg. BMW Motorrad, true to its identity, is also likely to bring along some custom accessories for the CE 04 and its buyers.

In terms of features, the BMW CE 04 is well equipped by scooter standards and gets nifty utilities such as a ventilated mobile charging compartment with a Type C port. The bench-like seat also reveals a helmet storage compartment. The e-scooter also gets a car-like 10.25-inch HD TFT infotainment screen and offers functions such as mobile phone connectivity, split-screen view, in-built navigation and more. BMW also offers 3 riding modes called Eco, Road and Rain. 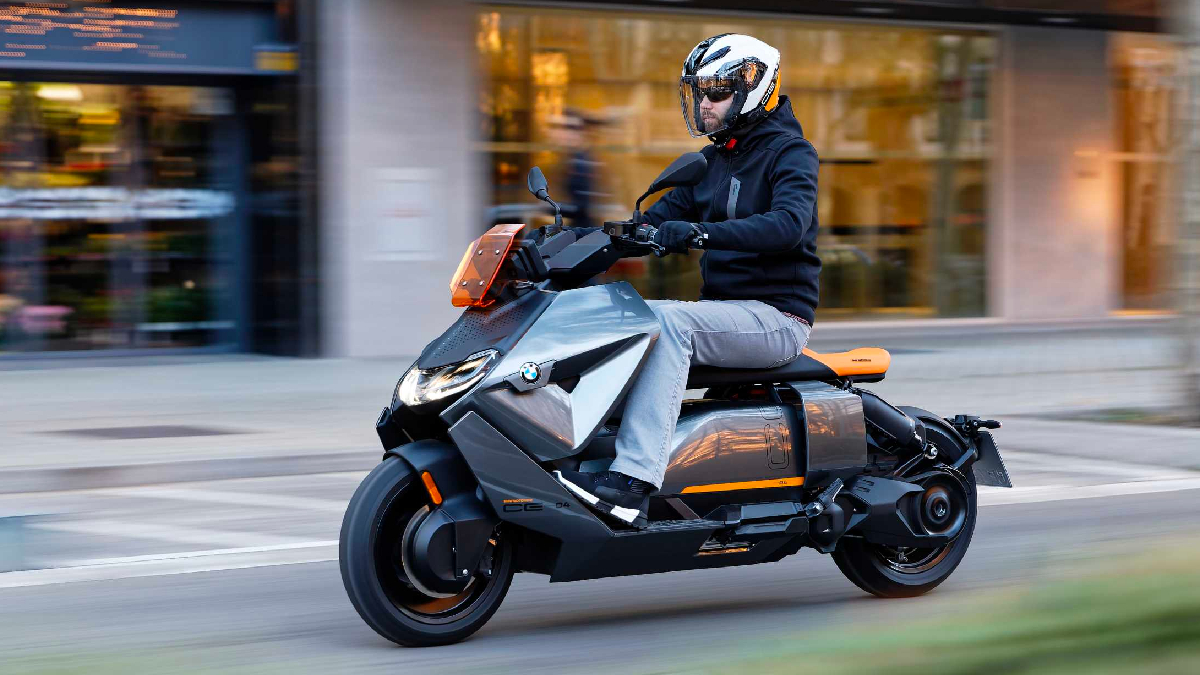 The BMW CE 04 is based on a tubular chassis and uses a 35mm telescopic fork at the front and a rear monoshock that is preload adjustable. It also uses a unique single-sided exposed swing arm. The BMW CE 04 rides on a pair of 15-inch wheels with 120-section rubber upfront and an even thicker 160-section rubber at the rear.

While the company has not yet announced its plans for the BMW CE 04 electric scooter in India, the brand’s success with its other niche is Rs 10+ lakh ICE scooter. We had earlier reported that BMW Group India President Vikram Pawah and other top-level executives at the company believed that such an ultra-premium electric maxi scooter could work for the Indian market. That said, the BMW CE 04 is likely to come via the CBU route in case it does. The e-scooter could wear a sticker for a mouth-watering Rs 20 lakh which would also bring it eerily close to BMW’s very own R 1250 GS adventure tourer bike in India.