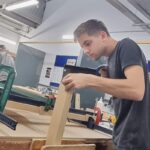 After impressing judges earlier this year in the Regional Qualifiers, Harry Scolding, 19, was selected for the National Finals. He travelled to Edinburgh College, alongside Construction Lecturer Arron Ward, where the LIVE competition took place over 3 days. The event attracted around 1,000 school visitors from across Edinburgh and the Lothians.

SkillBuild, often dubbed the ‘skills Olympics’, is delivered by the Construction Industry Training Board (CITB) in partnership with WorldSkills UK. It is the largest multi-trade competition in the UK for construction trainees and apprentices, and as competitors progress through each stage, they are tested on their technical abilities, time management, character, and commitment.

During the National Finals, Harry won the SkillBuild stretch test in Carpentry, Joinery and Furniture and Cabinet Making and was presented a book by IOC President Geoff Rhodes and IOC member Euan Elliott FIOC.

“It’s fantastic to meet all the talented individuals and hear about their career aspirations. It’s so important that we support this next generation of talent coming through to industry, encouraging them to pursue their passions and reach their full potential.

“It’s initiatives like SkillBuild that really make a huge difference and I’d like to thank everyone involved in making this year’s competition possible. Many congratulations to all the winners and everyone who competed, you should all be incredibly proud of yourselves.”

“Congratulations to Harry Scolding on his medal success in the Construction & Infrastructure Joinery Competition. We hope that his achievement will inspire more people to consider an apprenticeship and technical training as a route to great career success.”

Harry first visited the College’s Woodlands Campus in Smith’s Wood with his mum when he was in year 11 for an open event. It was at the open event that he first met Arron. He comments: “Arron was a massive inspiration and the reason why I joined the College as an apprentice.”

His journey as an apprentice has been memorable and he highly recommends this route to others: “My confidence has improved so much. I’ve gained lots of hands-on practical work experience and feel that I’m work-ready and employable.”

Arron couldn’t be prouder of Harry’s achievements and feels he himself has been able to try new things as he has supported Harry’s learning:

“I’m tremendously grateful to Harry for his commitment to his work and learning. Through supporting him and offering him advice, which he has always heeded, I’ve pushed myself more. Harry was a very shy young lad when he first started, and I’ve been impressed by how he has grown and developed into an exceptionally talented individual. I hope he continues to be an ambassador for the College after he completes his apprenticeship and visits us to inspire our new apprentices and students.”