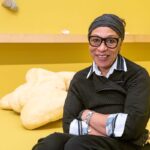 Bath Academy of Art-trained sculptor Veronica Ryan OBE has been named as the 2022 winner of the Turner Prize.

Arguably the most prestigious art accolade in the UK, the Turner Prize is awarded in recognition of an artist’s outstanding exhibition, or presentation, of their recent developments in British art.

Having studied for a BA in Fine Art at the Corsham Court campus-based Bath Academy of Art (now Bath Spa University’s Bath School of Art, Film and Media, at Locksbrook campus) from 1975-1978, Ryan went on to establish an internationally revered exhibition profile, winning numerous awards across the globe.

Ryan, who last year created the UK’s first permanent public artwork in honour of the Windrush generation, was born in 1956 in Montserrat and moved to London with her parents as an infant. At 66 years of age she is the oldest recipient of the Turner Prize to date, showing that age is no limit for incredible talent.

High praise for Ryan came from the Turner Prize judging panel for “the personal and poetic way she extends the language of sculpture” and the “noticeable shift in her use of space, colour and scale both in gallery and civic spaces”.

Ryan’s tribute to the Windrush generation of people who arrived in the UK from the Caribbean between the late 1940s and 1970s was unveiled in the London borough of Hackney. It was this sculptural installation that led to her nomination for the Turner Prize. Her oversized marble and bronze sculptures representing Caribbean fruit and vegetables such as breadfruit, soursop and custard apple captured the imaginations of many.

Paying homage to her roots, Ryan often uses the fruits, seeds, and even volcanic ash from her home island. Another of her exhibitions, Along a Spectrum, included cocoa pods, avocado stones, orange peel and crocheted fishing net bags. This was displayed at Spike Island in Bristol in 2021 and also contributed to her nomination. Through this work, she examined environmental and sociopolitical concerns, personal narratives, history and displacement, and the wider psychological implications of the Covid-19 pandemic.

Ryan’s inimitable creativity was evident when she displayed her unique works in a special Bath Spa alumni exhibition in February 2020, as part of the launch of the University’s new Locksbrook campus art facilities.

“We are absolutely delighted that Veronica Ryan has been awarded the Turner Prize 2022. Ryan’s sculptures are poetic and quietly provocative; her artwork stands out from all of the noise and brashness that is so often celebrated in the contemporary art world. Ryan is a champion for all artists who wrestle with complex subject matter, but do so in a discursive and contemplative way. As an alumni of Bath School of Art, Film & Media (formally Bath Academy of Art), Ryan is also a beacon for our talented artists, as they embark on professional careers with a mission to make positive change in the world through art.”

Ryan received a cheque of £25,000 and a trophy from Frankie Goes To Hollywood frontman Holly Johnson at Liverpool’s St George’s Hall on 6 December. Upon hearing her name announced as the winner, she exclaimed, “Power! Visibility!” and “better late than never”.

An exhibition of Veronica Ryan’s Turner Prize-winning work, and that of the three other shortlisted artists, can be seen at Tate Liverpool from now until 19 March 2023.