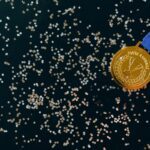 Barnsley College is celebrating success as two students have reached the final of the national Association of Colleges (AoC) Student of the Year Awards as well as achieving commended status for two AoC Beacon Awards.

The College will learn if it has claimed the crown in all four categories on 15 November at the annual AoC conference.

The awards represent the ‘Oscars’ of the further education sector, with the Student of the Year accolade showcasing the talents and successes of exceptional individuals who will go on to inspire others.

HE Sport student, Victoria Prendergast, is a finalist for the Higher Education Student of the Year Award which celebrates students who stand out from the crowd and have gone above and beyond whether in college or their local community.

Victoria was nominated by her tutor for her incredible resilience, shown through her determination and success in launching her own business to support children and young people in the community to keep fit all whilst studying as a mature student and raising children of her own. In addition to this, Victoria has also produced a six-book set of stories for children which explore the often-overwhelming nature of living with autism and sharing positive messages for readers.

A Level student, Safaa Shreef, is a finalist for the Student Green Commitment Award which is awarded to students who have made a significant impact on sustainability, biodiversity and green skills at a variety of levels. Safaa was nominated by her Personal Progress Mentor for her innovative thinking and drive. Safaa spoke at the COP26 conference in Glasgow when she was just 17 and has since continued to make a huge impact within Barnsley Sixth Form College.

Safaa has been described as a kind, enthusiastic and conscientious student who is academically outstanding. She works tirelessly to raise awareness and to develop and introduce environmental initiatives and is highly regarded both within the College and in the wider community.

Barnsley College has also been commended at the AoC Beacon Awards for its excellence in governance and use of digital technology, having demonstrated a high level of innovation, impact and sustainability. Meeting this standard reflects the Outstanding status as a sector leader.

“I am immensely proud that our students have been recognised in the AoC Awards this year. Our student body is exceptional, and I feel these categories in particular highlight the brilliant and inspirational things they achieve. It is fantastic to see their efforts honoured in this way.

“To also be nominated for two AoC Beacon awards is further proof of the vision and robust nature of our approach to governance, as well as our commitment to the innovative use of digital technology, which has seen Barnsley College recognised as a leader in these fields. I would like to thank all of our brilliant staff who have worked hard and have had their effort rewarded in seeing the College commended for two Beacon awards. I wish the staff and students that have been nominated every success.”