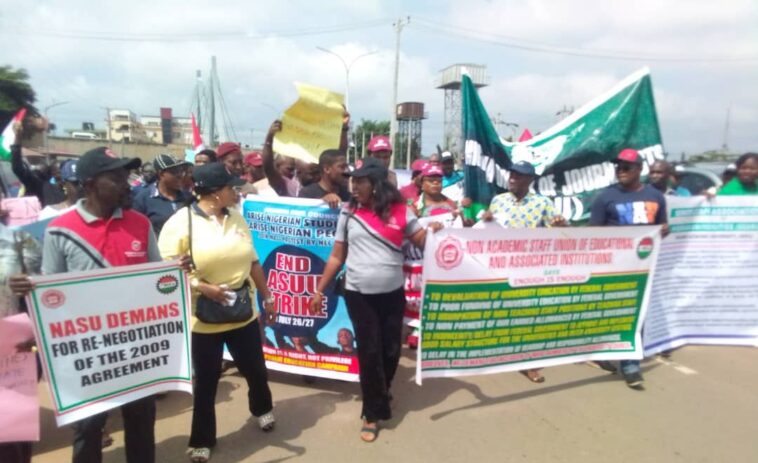 The leadership of the Nigeria Labour Congress (NLC), Anambra State Chapter, on Tuesday, joined the nationwide protest and demand that the federal government resolve all the lingering industrial disputes between it and all the university-based unions in the country.

The Paradise gathered that all the affiliate members of NLC in Anambra State, participated in the nationwide protest in solidarity with the ongoing strike action by the Academic Staff Union of Universities (ASUU).

Addressing members shortly after the protest at Ekwueme Square Junction by Enugu-Onitsha Expressway, Awka, the State Chairman of NLC, Comrade Chinwe Orizu, said the peaceful protest was in compliance with the resolution of the congress, representing the first in the series of actions geared towards compelling the Federal Government to do the needful.

She appealed to the state governor, Chukwuma Soludo, to use his good office and good conscience to get the Federal Government to bring to an end the strike action.

The Chairman warned that NLC would be left with no option than to join ASUU in the strike action if the government does not resolve the lingering industrial dispute soon.

The Nnamdi Azikiwe University (Unizik), Chairman of ASUU, Comrade Stephen Oforoah, who also spoke on the development, noted that the essence of the protest was not for ASUU alone but for Nigerians irrespective of tribe, ethnic and religious placement to get back their education right in the country, education sector should be well funded and workers at the Universities should be paid of their salaries and their entitlements.

“The federal government should honour the agreement it entered with ASUU since 2009, and, to make sure there is no disparity in the implementation of the salaries of all workers in the federal university system, he added.

Comrade Oforoah commended the Labour Unions for the peaceful protest in the state.

The chairperson, Senior Staff Association of Nigerian Universities, SSANU, Nnamdi Azikiwe University, UNIZIK, Awka, chapter, Dr. Uchenna Nwangwu, on his part, raised an alarm that many students of Nigerian universities have now been forced into prostitution and other criminalities as a result of the protracted strike action.

Dr. Nwangwu who condemned the federal government seeming lack of concern over the manner the university lecturers’ strike action had kept the students at home for the past six months, showed that the country was under bad leadership.