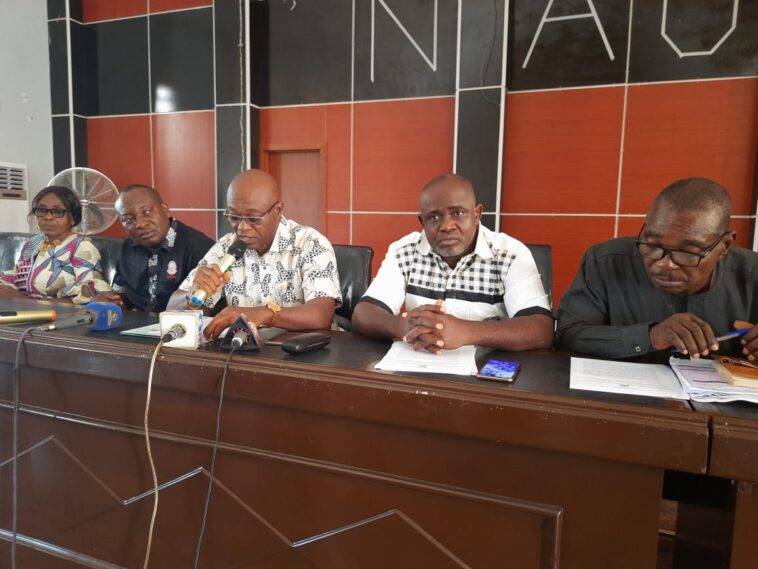 The Academic Staff Union of Universities, ASUU,  has accused the Federal Government of deliberating delaying the signing and implementation of the 2020 renegotiated agreement, as well as the deployment of University Transparency and Accountability Solution (UTAS) as a payment platform.

The Union also alleged that the NITDA policy was a tool set up by the Federal Government to blackmail the union’s struggle and to put UTAS in a bad light.

Addressing newsmen at ASUU Secretariat of Nnamdi Azikiwe University, Awka, on Wednesday, the ASUU Owerri Zonal Coordinator, Comrade Uzo Onyebinama, noted that among the outstanding issues yet to be addressed in the 2020 Memorandum of Agreement is the acceptance and signing of the renegotiated 2009 FGN-ASUU Agreement which embodies the conditions of service for academic staff in public universities.

The zonal coordinator decried that academic staff in public universities in Nigeria have been on the same salary structure since 2009 – a decade and three years, warning that the union would never suspend its ongoing strike unless the federal government meets the two demands – signing of the renegotiated FGN-ASUU Agreement and deployment of UTAS.

He said, “Another major outstanding issue is the reluctance of the Federal Government of Nigeria to deploy the University Transparency and Accountability Solution (UTAS) as a payment platform for the salaries and other entitlements of academic staff in public Universities.

“UTAS is a brainchild of ASUU, borne out of the patriotic zeal to improve financial and programme accounting in public universities, after it became obvious that the Integrated Personnel and Payroll Information System (IPPIS) had contributed to and compounded corruption in public universities”

He lamented that despite the irregularities of the IPPIS, the federal government still chose it as a payment platform against all voice of reasoning, saying UTAS received a score of 99.3 per cent after remediation and conclusion of tests by the Nigerian Technology Development Agency (NITDA).

Comrade Onyebinama maintained that the deployment of UTAS as the payment platform for academic staff in public universities is a central issue in the resolution of the strike, calling on leadership of NITDA to urgently do the needful and stop deceiving the public.

Onyebinama, called on the Civil Society Organisations (CSOs), traditional rulers, religion leaders, the media and other concern individuals and corporate bodies to also show concern on the ongoing disagreement between the Union and the Federal Government over member’s working condition.

Earlier during the press conference, Comrade Stephen Ufoaroh, ASUU chairperson, Nnamdi Azikiwe University, Awka branch, said the union would not relent in its effort to save the soul of public universities to ensure that an average Nigeria assesses quality university education at minimal costs.

Comrade Dennis Aribodor, a former ASUU-NAU chairperson, had, on the sideline of the press conference, called on Nigerians to rise up and challenge the government to avoid destroying public education starting from primary to tertiary institutions, even as he asked Nigerians to hold the government accountable.