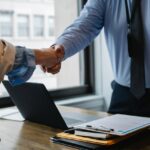 Arts University Plymouth has appointed Stephanie Owens as Dean of Arts, Design & Media. Stephanie relocated from the US to Plymouth in 2019 to take up a role as Head of the School of Arts + Media at the city’s arts university. At Arts University Plymouth, Stephanie founded the StudioLab for Embodied Media, a research initiative in immersive media which brings together a multidisciplinary team of artists and designers who are collectively motivated to think about the integration of biological and computational systems from a more sustainable and ethical perspective.

Stephanie also leads the Making Futures Research Group which is aligned to Arts University Plymouth’s Making Futures Biennial, an international conference that investigates contemporary craft and maker movements as ‘change agents’ in 21st century society. With Stephanie at the helm of the upcoming Making Futures biennial in autumn 2023, events and talks will explore crafting as a cultural idea that is currently undergoing radical transformation with the advent of distributed production, new materials, regenerative design principles and non-extractive processes, which have generated a new language of form that is meaningful beyond object production.

A former Director of the Cornell Council for the Arts (CCA) at the US Ivy League institution, Cornell University, Stephanie is an interdisciplinary artist, creative researcher, and curator interested in the influence of digital networks on contemporary aesthetics and the production of subjectivity.

Stephanie Owens said: “To become Dean of Arts, Design & Media at Arts University Plymouth in the same year that it has been awarded university title is a real honour and I’m thrilled to lead a team of brilliant, dedicated academics who shape and inspire the creative journeys of our students’.

“My focus as Dean will be firmly on the future – our future as a creative institution, the careers that our students aspire to create for themselves, and the sustainability of the world that they’ll be graduating into. Arts University Plymouth has over 165 years of collective expertise in material practices through our nationally recognised courses in glass, textiles, ceramics and metals. I want to build on this heritage by establishing a space where students and researchers can now explore these traditional practices with an eye on sustainability and regeneration, sending graduates into the world who are prepared to work creatively without contributing to the degradation of the natural environment.

“I also want to expand the scope and ambition of our StudioLab for Embodied Media. The southwest of England is a hub for digital creativity and experimentation with immersive and augmented reality technologies. Arts University Plymouth can empower creative thinkers to develop immersive cultural experiences that expand beyond the conventional use of technology, utilising spaces like the immersive dome at the Market Hall or new types of wearable technology to blur the boundaries between physical and digital experiences, bringing people closer together.”

Stephanie has spent much of her career creating spaces for meaningful and unexpected affinities between historically juxtaposed disciplines, most recently as founder and curator of Cornell University’s first art biennial focused on the intersections between art, design and research science. She has long championed the importance of the arts in the context of research and innovation, advocating in her recently published response to the Parliamentary Communications and Digital Committee inquiry, “A creative future”, for the central role that the arts need to play in addressing the most urgent challenges in society. Stephanie has a BFA from Syracuse University and an MFA from The School of the Art Institute of Chicago, with a specialism in fine art and philosophy. She has taught digital media, studio art, aesthetics, interaction design and contemporary art theory at Cornell University, College of Architecture, Art and Planning; IUAV University of Venice, Parsons The New School for Design, MFA Design & Technology Program; and The School of the Art Institute of Chicago.

As an artist, Stephanie exhibits her work internationally, including shows at the First Beijing International Media Arts Exhibition (Beijing, China), Dashanzi Art Festival (Beijing, China), 5th Ewha Media Art Exhibition, (Seoul, Korea) and the Machinista International Arts and Technology Festival. Frequently a speaker on art and technology, she has presented papers at SIGGRAPH (Los Angeles), Consciousness Reframed: Art, Identity and the Technology of Transformation (Lisbon) and presented her work as an invited panellist on ‘Network Aesthetics’ at The School of Visual Arts (NYC).