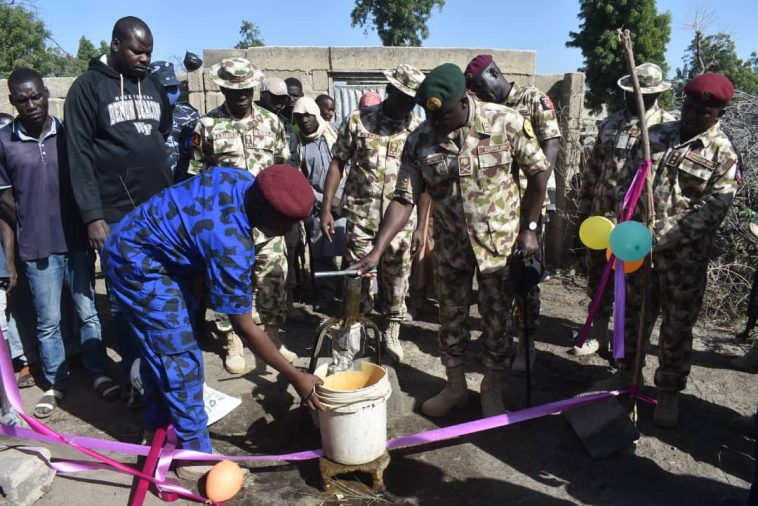 The Commander Sector 3 Operation Hadin Kai/Multinational Joint Task Force, Major General Godwin Mutkut has appealed to members of Baga community in Kukawa Local Government Area of Borno State to always support the Nigerian Army in it’s operation by providing actionable information on terrorists’ activities in their area in order to sustain the peace that has been restored in Baga.

The Army Commander made the appeal during the commisioning ceremony of twelve boreholes executed in the host community Baga, Borno State of north east Nigeria yesterday.

The execution of the pet project is one of the Sector’s Civil Military Cooperation activities aimed at winning the hearts and minds of the host community.

The twelve boreholes were sited at strategic locations in Baga, Doron Baga and Buduram respectively.

Earlier in his speech, the Chairman Kukawa Local Government Area Alhaji Bukar Aji commended the Commander 19 Brigade and the Commander Sector 3 Artillery Brigade for their benevolence in executing the project which has added value and relief to his people. He also extended his gratitude to the Sector 3 Commander and Nigerian Army in general for the wonderful gesture and promised that his people will reciprocate the gesture by continuing to assist the Security Agencies in providing information.

The high point of the event was the cutting of the symbolic ribbon by the Commander Sector 3 Operations Hadin Kai/Multinational Joint Task Force, Major General Godwin Mutkut.