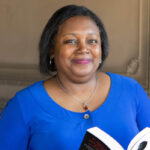 Budding writers everywhere have the chance to win a scholarship to fund one year’s study in creative writing, as the Malorie Blackman Scholarships for Unheard Voices open for applications today.

The scholarships, launched by adult education provider City Lit in 2020, provide three annual awards worth up to £1,000 each, to fund one year’s study within the Creative Writing Department at City Lit. The awards seek to support and encourage the creative and professional development of writing by ‘unheard voices’, with the final award winners selected by acclaimed writer, City Lit fellow and Patron of the School of Culture and Communications, Malorie Blackman OBE.

Malorie Blackman has a long connection with City Lit as a former student attending diverse courses since the late 1980s. She has been recognised with numerous honours for her work and in 2008 received an OBE for her services to children’s literature. Malorie was the Children’s Laureate between 2013 and 2015 and her autobiography was published on Stormzy’s Merky Books imprint this year.

City Lit’s Malorie Blackman Scholarships for Unheard Voices welcome applications from anybody who has a strong interest in writing and who demonstrates talent and potential in their writing skills. Students who identify as belonging to under-represented groups, which include (but is not exclusive to) those with disabilities, people from minority backgrounds and communities, members of the LGBTQ+ community, individuals from lower socioeconomic backgrounds, refugees and BAME writers, are encouraged to enter.

“Creative Writing has an amazing heritage and pedigree at City Lit with so many famous writers having enhanced their craft with us over the last 100 years. Malorie Blackman is one of our most famous alumni and a huge inspiration to all of us. Her relationship with City Lit shows how important creative writing courses can be in a writer’s career. We can’t wait to see what the next generation of writers has in store for us…”.

Applications involve the submission of a piece of original writing no longer than 500 words in length (for prose writing) or up to 40 lines (for poetry), and a completed application form including a statement of up to 300 words identifying how you feel you meet the selection criteria.

Find out more and download the application form at www.citylit.ac.uk/malorie-blackman-scholarships.