The Cupertino giant’s smartwatch – Apple Watch still dominates the competition, accounting for more than half of the high-end smartwatch market, but the industry is evolving and becoming more competitive. Although the Apple Watch did not create the smartwatch business, it gave it purpose and significant momentum. Even though it is not nearly as necessary as a smartphone, the Watch has structured and controlled the market for this growing accessory since its launch in April 2015.

Apple Watch: Apple is still the leader far away from competitors

A market research business named Counterpoint Research provides some numbers on this Cupertino company’s dominance in its most recent study. Strong sales of the Watch Series 8 are said to have contributed to Apple’s third-quarter growth of 48% year over year. The watch would account for 56% of all Apple Watch sales. With its full product offering, Apple would be able to account for 50.6% of the world’s market for premium smartwatches. Despite a decline from the previous quarter, when the Watch accounted for 54% of the market. This is still a dominant position. This appears to be caused by a slowdown in Apple’s two key markets in North America and Europe.

Samsung, Apple’s main rival, is still far behind and holds only 22.3% of the market for expensive smartwatches, an increase of 5%. Sales for the Korean giant increased significantly (+62%) in the most recent quarter thanks to the Galaxy Watch 5. However, its market shares across all price points are down 2.7%.

” Despite inflation and geopolitical crises that have continued since the beginning of this year, the global smartwatch market shipments increased 30% YoY in Q3 2022, according to Counterpoint Research’s latest Global Smartwatch Model Tracker. During the quarter, India’s market grew 171% YoY to become the biggest smartwatch market in the world. Other markets also grew YoY, except China and Europe”.

Behind these dominant two players, Amazfit comes in third place with 7.1% of the market. Followed by Huawei with 6.4% (the Chinese company also has 3.2% of the market for entry-level smartwatches). Then we have the foremost expert in watch for demanding athletes, Garmin, who appears last. The American business controls 4.5 percent of the market. Even if these sales did not increase in the previous quarter. It is noteworthy to note that Counterpoint Research reports that its revenues increased by 11% as a result of an average selling price of about 365 dollars. Which is higher than Apple’s average pricing. We now know more about the Cupertino giant’s motivations for attacking this market with the Watch Ultra in September.

It should be noted that the Google Pixel Watch is currently too new to be included in these sales figures, so it will be necessary to wait a while to learn if it has been successful in carving out a niche for itself in this industry.

A successful year and a developing market 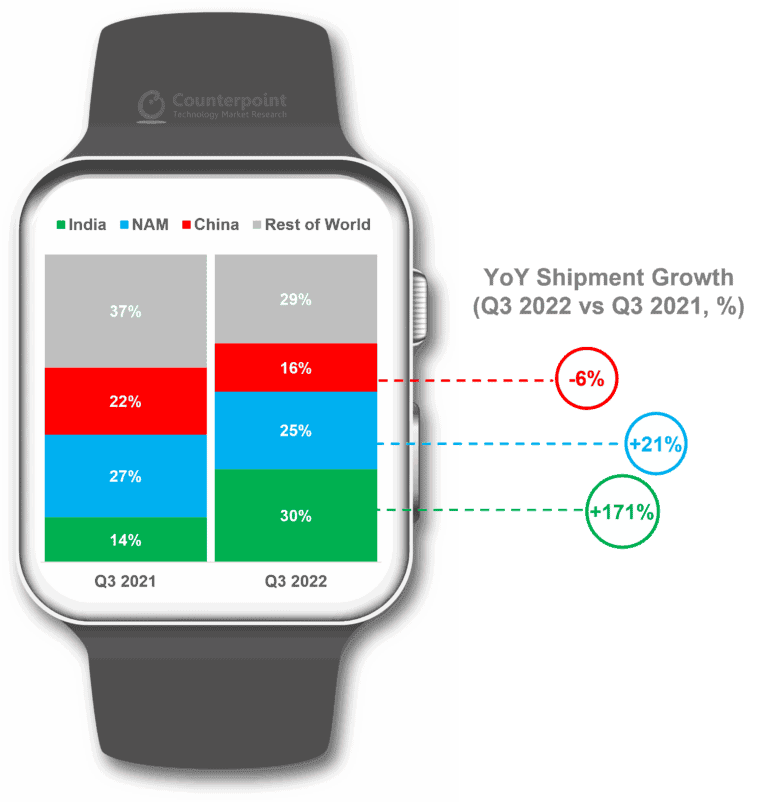 In any case, the analytics company’s data shows that 2022 was one of the best years to date for the smartwatch business. Despite being far less than the growth of smartphones, this industry would have had a third-quarter 2022 growth of 30%. This rise has been weaker or perhaps nonexistent in various parts of the world, notably China. India, another market with enormous potential, would have witnessed a growth of 171% from one year to the next. In addition to Europe, as we have seen.

The smartwatch market is starting to contract as evidence of some maturity. As a result, in the third quarter of this year, the submarket for less expensive and powerful smartwatches more than quadrupled. Presently, it accounts for 35% of the entire market. Despite this, sales of high-end linked watches increased by 23% in comparison to the same period last year. Particularly given that the entry-level market is still ten times larger than the top of the range in terms of income. A situation that is undoubtedly explained by strong sales figures as well as by a significantly higher average price.