By Office for National Statistics (ONS) 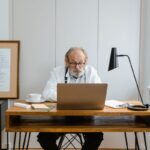 An exclusive survey of over 50s by the UK’s leading independent job board, CV-Library, has revealed that an overwhelming 91% of inactive workers in the age bracket intend to return to work.

The Office for National statistics (ONS) recently revealed that the number of people aged 50-64 who are economically inactive has increased by 3.6 million, a rise of 10% since before the pandemic and the survey results support this with 41.5% reporting that they either left a job or have been out of work since then, but a turnaround looks imminent.

72% of the 2,250 surveyed state the reason for returning is due to necessity over the cost-of-living increases and worries about their pension, with a further 36% stating boredom and another 25% citing the intention to take advantage of the record number of job vacancies available. *

Interestingly, the majority (68%) are looking for a full-time role but 70% want flexible working patterns. Other revelations include the fact that 65% expect a higher salary given their age and experience but only 32% expect a more senior job title.

With a breadth of experience, 43% still feel that they’ll require some additional training in their next role but more than 60% feel more confident as they’ve gotten older.

“With many vacancies still unfilled it’s great news that a significant number of experienced workers are planning on returning to work.”

“It’s fair to say that every business in the UK has their costs under review and when it comes to the hiring process, the needs of the company and role should come before anything else but employing staff in the 50+ bracket can add experience and stability as well as diversifying the workplace.”