A 21-year-old Chihuahua from Florida broke the Guinness World Record for being the “world’s oldest living dog,” the New York Post reported Tuesday.

The dog, named TobyKeith, was officially named as the record holder on March 16 of this year, his owner, Gisela Shore said, according to the New York Post. The dog turned 21 years old Jan. 9.

Shore attributed her dog’s long life to a variety of factors, including regular exercise, the outlet reported.

Shore adopted her furry friend from the Peggy Adams Animal Rescue when he was just a puppy, Guinness World Records reported. An elderly couple supposedly wanted to give up the pup because they were unable to care for him, according to Guinness World Records. Shore then stepped in to adopt him.

“I met with the elderly couple and was introduced to a tiny tan Chihuahua,” Shore told Guinness World Records. “They had named him Peanut Butter. I later changed his name to TobyKeith,” she added. Shore also said she thought her dog might be the oldest living dog when he turned 20. (RELATED: Oldest Golden Retriever In History: Augie The Dog Celebrates Her 20th Birthday)

Shore’s pup, who is named after country singer Toby Keith, weighs seven pounds and typically sleeps around 20 hours a day, according to WPBF. Aside from taking heart medication, the dog is healthy, the outlet reported.

In addition to TobyKeith, Shore has two other dogs and two parrots, according to Guinness World Records. Shore said that the dog gets along well with her other animals.

Shore described TobyKeith as her “little bodyguard,” explaining that he’s always with her, WBPF reported.

The average lifespan of a Chihuahua ranges from 12 to 18 years, according to Guinness World Records. 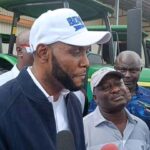