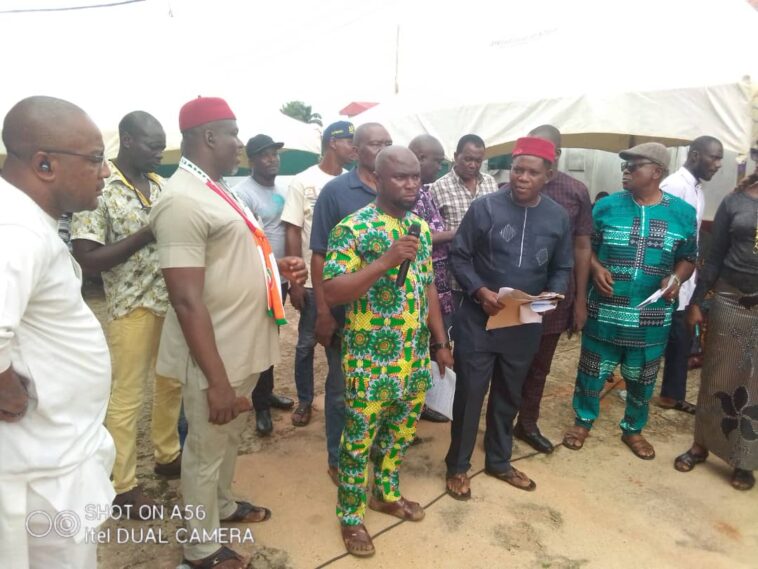 Ahead of the 2023 general elections, the Anambra State Chapter of the Peoples Democratic Party (PDP), has called on the National Chairman, Senator Ayurcha Ayu and the National Working Committee (NWC), to as a matter of urgency, suspend the party’s National Legal Adviser, Barrister Ajibade Adeyemi, over alleged unethical conduct and breach of his oath of office on matters affecting PDP in Anambra state.

The Chapter say the National Legal Adviser, whose duties includes defending litigation against the Party and its organs contrary to the Provisions of the Party’s Constitution Article 42 (1b) of the PDP Constitution 2017 (as amended), was not up and doing.

They accused him of working for Chief Chris Uba, to thwart the express decisions and resolutions of the NWC, to take over all the Litigations concerning PDP in Anambra State.

The chapter also urged the NWC, to exonerate themselves from all actions of the National Legal Adviser.

The call was contained in a Communique issued to Journalists at the State party Secretariat, Udoka, Awka, on Sunday, shortly after an emergency meeting of all the 21 local government Chairmen in the state, Ward executives and the party aspirants in the 2023 general elections. It was read by Orumba North LGA Chairman, Barrister Uchenna Obiora.

The Communique read in part; UNETHICAL CONDUCT OF THE NATIONAL LEGAL ADVISER OF PDP, BARRISTER AJIBADE ADEYEMI (SAN) IN THE CONDUCT OF MATTERS AFFECTING PDP IN ANAMBRA STATE: TIME TO CALL HIM TO ORDER.

The National Legal Adviser, whose duties includes defending litigation against the Party and its organs contrary to the Provisions of the Party’s Constitution Article 42 (1b) of the PDP Constitution 2017 (as amended) proceeded to do the following:

1. Instructed Adedamola Fanokon Esq. to concede to the I claims of the Plaintiffs in Suit No: FCT/HC/CV/83/2022, which was against the ratified and approved list of wards and LGA Executives that emerged from the congresses conducted by the Electoral Committees Constituted by the NWC with approval of NEC and equally monitored by INEC and Security Agencies in line with the guideline and Constitution of the Party.

2. Following the actions of the National Legal Adviser Ajibade Adeyemi (SAN) in mortgaging the interest of the Party in the aforesaid suit, Elected Wards and Local Government Executives made complaints to the Party leadership and equally requested to be given a fiat to enable them defend themselves in court, which was flatly rejected by the National Legal Adviser, hence having exhausted all the internal mechanism of complaint within the Party, they proceeded to commence Suit No: OT/72/2022 in the High Court of Anambra State, and obtained a final Judgment which affirmed the wards and Local Government Area Executives as conducted and ratified by the NWC, the National Legal; Adviser Ajibade Adeyemi (SAN), The same SAN, nominated and being paid by Chief Chris Uba was equally instructed by the National Legal Adviser, to take over all the Litigations concerning PDP in Anambra State. The sole aim of Ajibade Adeyemi (SAN) actions is to thwart the express decisions and resolutions of the NWC.

The question that comes to mind are: 1. Who is the National Legal Adviser working for in Anambra State?

2. Is it Chief Chris Uba and his cronies or the Survival of the Party in Anambra State?

3. Why is the National Legal Adviser compromising his office and oath of office against the express decisions of the NWC of which he is a member?

2. To forthwith conclude the State Congress in Anambra State, before the National Convention, having concluded and ratified the wards and LGA Congresses and same having been affirmed by a final Judgment of a High Court of Anambra State, and same being the list of EXCOS as monitored and certified by INEC to avoid already threatened litigation that may emanate or arise from such exclusion and suppression of delegates from Anambra State. Dated this 15th day of May 2022.

It was gathered that PDP in Anambra state is in serious crisis over who control the party in the state, between Chief Chris Uba and Chief Ndubuisi Nwobu led-faction.