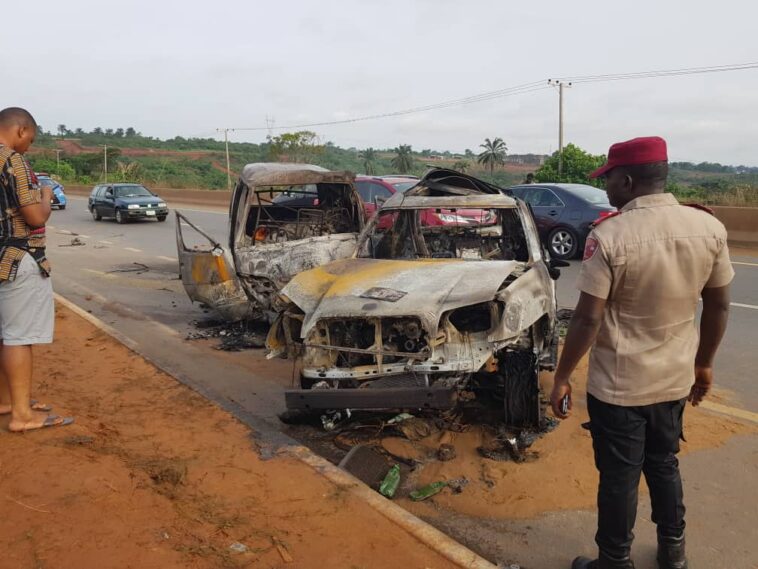 Two Roman Catholic Reverend sisters, including one other female and two males on wednesday, lost their lives in a ghastly motor accident.

The Paradise News gathered that the ill fated accident took place along the Nawfia, Enugu -Onitsha expressway in the morning.

Confirming the incidence, AG Sector Public Education Officer, Anambra State FRSC. DRC Margaret B Onabe said “Unidentified driver of a Toyota Highlander with registration number: BMR570BE and a Toyota Hiace Bus with no registration number was involved in a Fatal road traffic crash in the early hours of today 13th April, 2022 at about 06:30hrs”.

According to eyewitness report, the bus driver was on speed, lost control, and rammed into the Highlander from behind, crashed and the both vehicles caught fire.

As at the time of filling this report, the fire service has been able to put off the fire.

Meanwhile, FRSC Rescue team from RS5.3 Sector Command Awka are on ground managing traffic and ensuring obstruction caused by the crash is removed.

The Sector Commander Anambra State Corps Commander Adeoye Irelewuyi Commiserate with the families of the dead victims and sends his prayers to the victims repose souls.

While he warned Anambra State motorist to avoid Speeding and ensure they keep to recommend speed limit. Speed Drills but kills Check your speed and not your watch, Let’s keep our road safe from crash he warned.